Gibertini Elettronica has been a leader in the wine market for over 30 years. Manufacturer of analytical instruments such as densimeters and distillers, according to the official OIV methods.

MIA2020 is an hydrostatic scale for determining the alcoholic strength by volume according to the OIV-MA-BS , for Dry extract and musts evaluation in degrees Brix, Baumé, Oechsle, Babo, Plato.

The MIA2020 system is based on the Gibertini hydrostatic balance for the determination of the alcohol content ABV with a resolution of 0.005% Vol, thanks to the software pre-installed on the terminal it calculate :

Hydrostatic scale MIA2020 and Alcosof3. The system records all the samples, produces reports and prints labels guaranteeing efficiency and traceability of the results. Is composed by :

The terminal (from 8 '' to 12 '') can be used wearing silicone and latex gloves, with a clear and intuitive user interface. And Stores over 100,000 samples per method.

Because the Gibertini MIA2020 system is designed for wineries, chemical analysis laboratories on wine matrices, regions and certification bodies for: 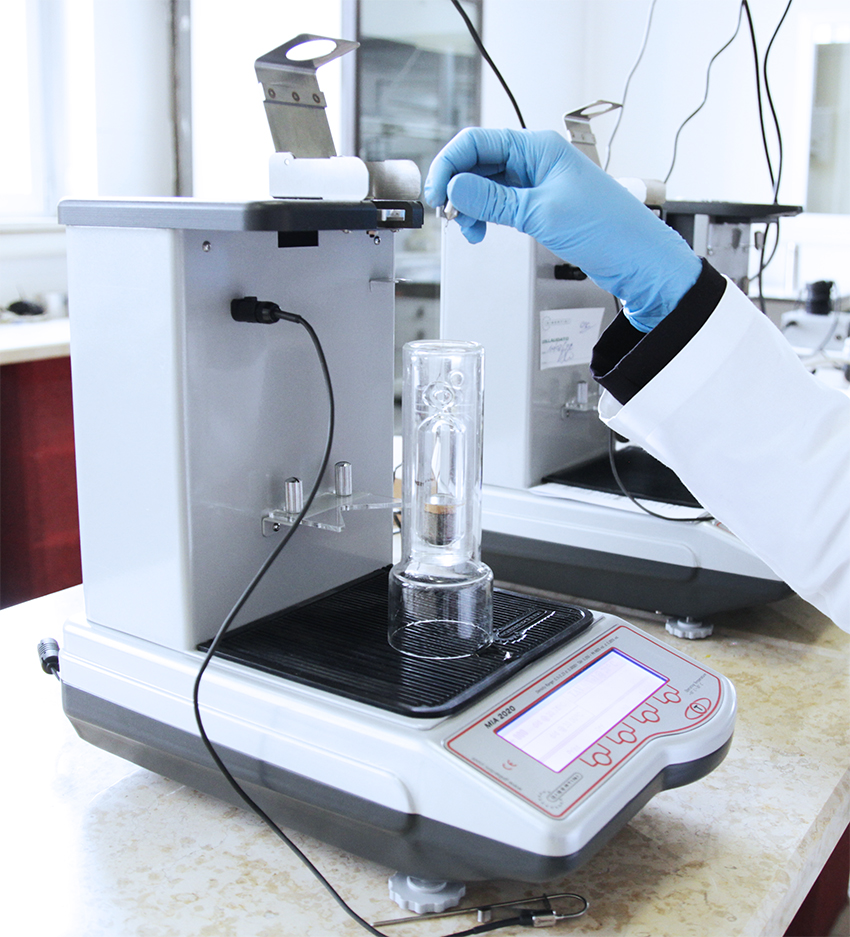 How to use MIA in 4 simple steps

1. Fill the double-jacketed cylinder with sample until the indicated level is reached

2. Place the cylinder on the instrument, immerse the probe and the previously clean and dry float in the liquid

3. Shake (for a few seconds) the dip tube in the liquid slowly with a circular motion

4. Push the cylinder towards the appropriate center-cylinders and wait for the stable data

At the end of the reading, the Alcosoft software will display the results according to the selected method: Alcoholic Strength (ASV), Dry Extract, Musts Evaluation

Used in the analysis of products such as: 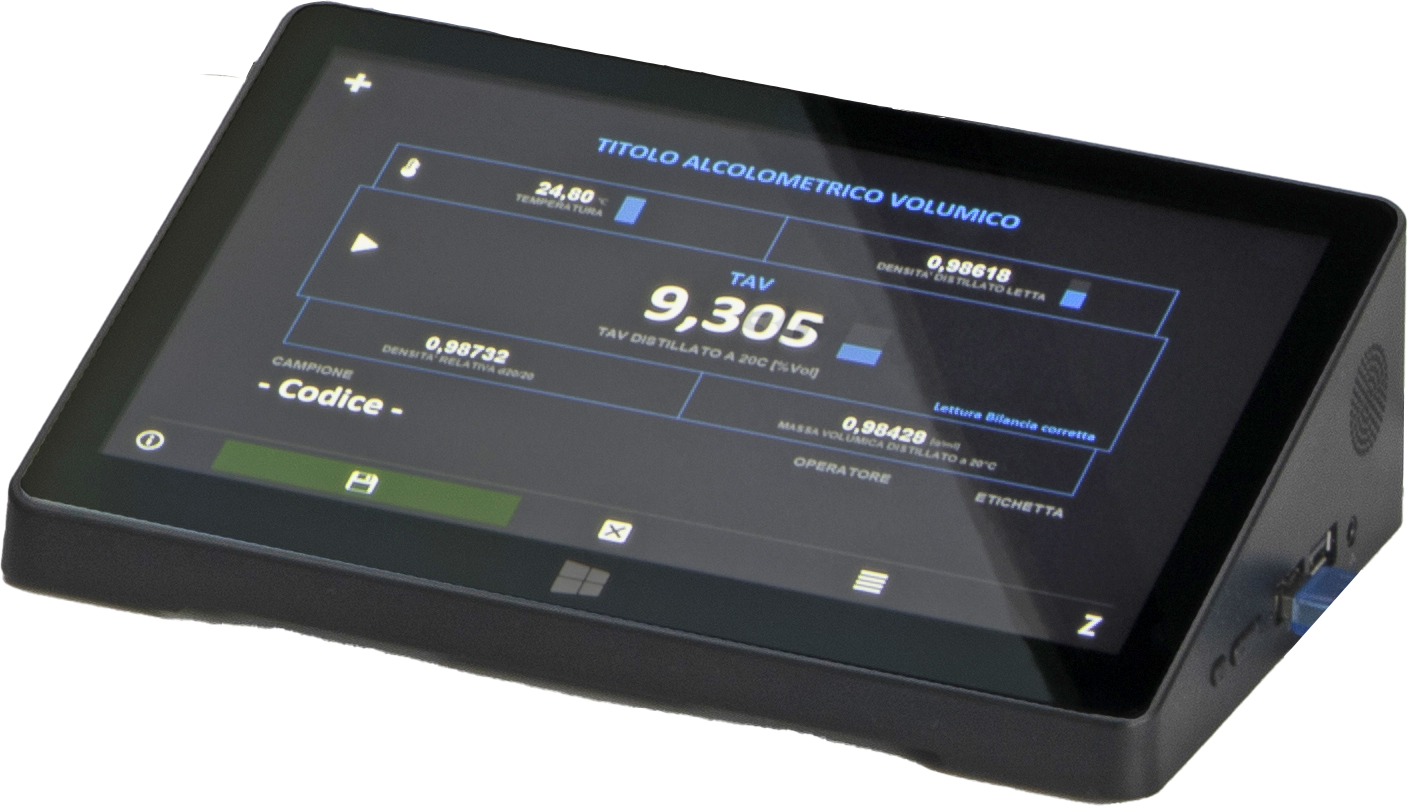 The following accessories are available for all instruments of the MIA2020 series:

What is a hydrostatic scale?

The hydrostatic balance is an instrument used for the determination of the density (mass / volume) of solids and liquids using the Archimedes principle, with the elegant compensation system through weights of the "thrust" of the liquid in which a solid body is immersed, with respect to equilibrium of the same body in the air. Already in 1586 Galileo Galilei (1564-1642) in his writing "La bilancetta" describes the project of a balance or hydrostatic balance for determining the specific gravity of a metal when immersed in water, i.e. the weight relative to an equal volume of water. It consisted of a lever device with central fulcrum, at the ends of which a metal and were hung respectively on the other, a counterweight. Galileo made this device only in 1608 [1]. The common hydrostatic balances (figure 1) allow to measure both the density of solid substances that liquid. They are normal two-arm scales, adapted to be able to measure the weight of a body solid both in air and immersed in a liquid.

The alcohol content of a wine is the volume of ethyl alcohol, expressed in milliliters, contained in one deciliter of a given drink. According to the more generic definition of the current legislature, it represents "the number of parts by volume of pure alcohol, at a temperature of 20 ° C, contained in 100 parts by volume of the product, considered at the same temperature". A wine with an alcohol content of 12, for example, contains 12 milliliters of alcohol per 100 ml of product. The alcohol content is expressed in a number followed by the percentage symbol (% Vol.).

“The alcoholic strength by volume of a drink is equal to the number of liters of ethanol contained in 100 liters of a hydroalcoholic solution having the same density as the distillate of that drink; said volumes are both intended to be measured at a temperature of 20 ° C. Its symbol is "% vol.". (OIV-OENO 601B-2021)

The alcoholic strength of spirit drinks can be measured by densimetry using the hydrostatic balance, based on Archimedes' principle according to which a body immersed in a liquid receives from the latter a vertical thrust from the bottom upwards equal to the weight of the displaced liquid. The principle of the method consists initially in distilling the drink. This distillation allows the elimination of non-volatile substances. Subsequently, the density of the distillate obtained is measured. The density of a liquid at a given temperature corresponds to the ratio of the mass to the volume of the liquid (m / V). In the case of wine drinks, it is expressed in g / cm3. For hydroalcoholic solutions, such as a distillate, if the temperature is known, it is possible to establish the correspondence between a density and an alcoholic strength by means of tables (OIV-MA-AS312-02: R2009, table 1). This alcoholic strength corresponds to that of the beverage (distillation volume by volume). 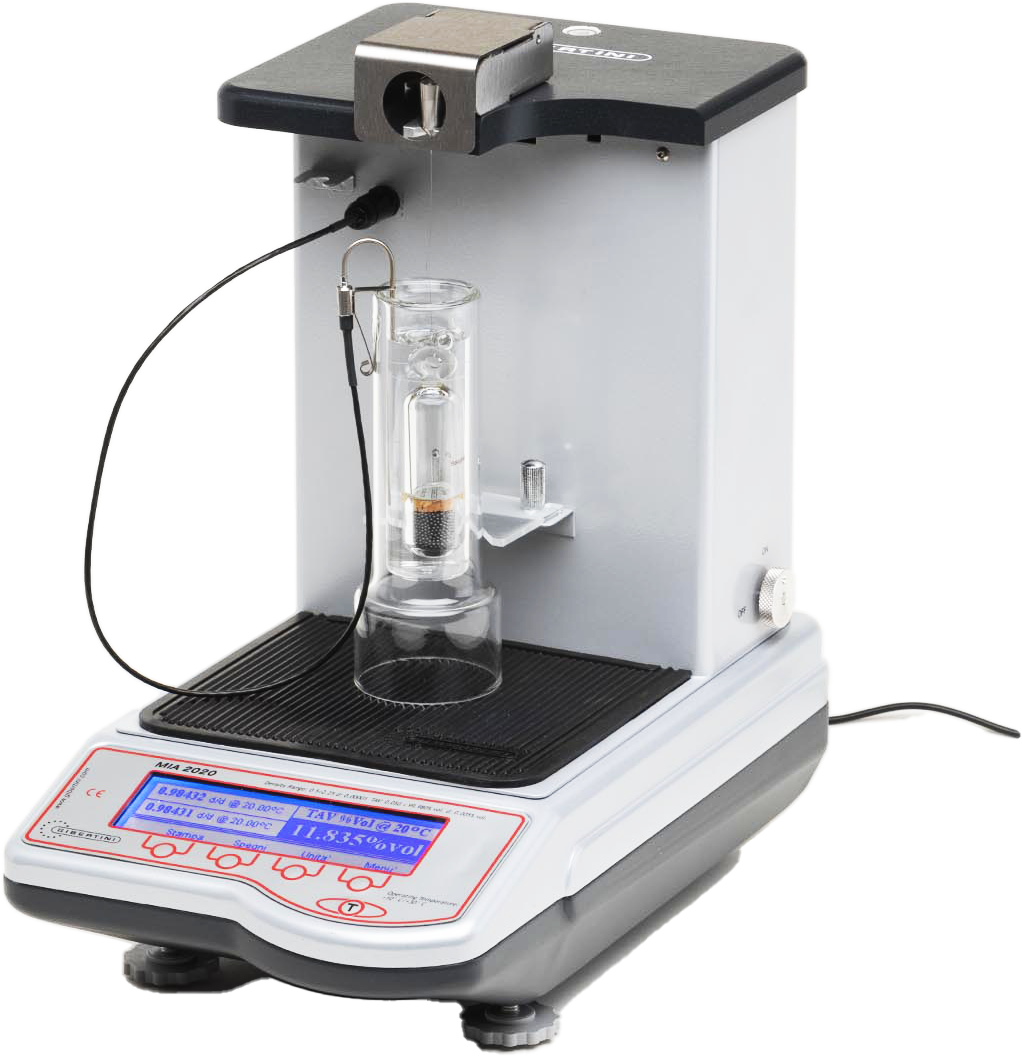 Why is it important to accurately determine the Plato degree in beer?

Based on art. 34 TUA, beer is subjected to excise duty with a rate referring to the hectolitre, at a temperature of 20 C, and to a Plato degree of finished product. Excise duty is a tax on the manufacture and sale of consumer goods. It is a tax applied to specific types of products, linked to the quantity and influences the cost of the final product. Ethyl alcohol, beer, wine, fermented beverages other than wine and beer and intermediate alcohol products are subject to excise duty.